Don't miss a beat or a book — sign up for our newsletter!

Since 1978, the Friends’ main fundraising event has been the Annual Bargain Book Sale.  Our first sale was held on the Central Library plaza when the library was just two years old.  Subsequent sales were held at the Albert Thomas Convention Center (now closed), the Sam Houston Coliseum (also closed), and the Astrohall (now known as Reliant Hall). 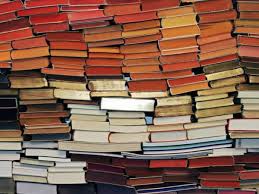 From 1998-2013 the sale celebrated success after success at the George R. Brown Convention Center. For the past several years, sharply rising costs for facilities and parking made the Convention Center cost-prohibitive for our mission, so in 2012 the Board voted to move the sale into more accessible—and more affordable—locations.  In 2014, we transitioned to a quarterly community-based book sale model: three sales of books from all categories, and one sale featuring only children’s books.  Each of these include over 25,000 books, the majority of which will be priced at $3 or less. At each book sale, Friends Members enjoy discounted pricing and special early access.

Volunteers work year-round at our Book Warehouse to get ready for these sales.  We have over 500 unique volunteers who donate more than 2,500 hours each year to scanning, sorting, and listing books culled from the Houston Public Library’s collection and donated by the public.

Once housed at the Houston Terminal Warehouse, our book sorting operation has moved many times over the years. We are currently located in part of the Chase Bank Building at 6510 W. Little York in northwest Houston, where as of January of 2016 we are working through a vibrant renovation process.

Each October, the Friends of HPL hosts its Annual Meeting, which features a local author as guest speaker.  Here, we present the Director of HPL with our annual gift, which funds staff development, library programming, and continued support for neighborhood libraries.

In the past, the Friends of HPL has provided early support for the Power Card campaign and helped purchase materials for the library during lean budget years.  A separate gift, established in 1993, provides up to $10,000 in scholarship support to HPL staff who are working toward a Masters of Library Science degree.

The Friends became a 501(c)(3) in 1958.  In 2007, the Friends’ Board of Directors voted to dissolve their 501(c)(3) and join the Houston Public Library Foundation, which was organized in 2006 to comply with new tax laws and provide an umbrella organization for other Houston Public Library groups. The Friends retains its own mission, separate by-laws, and an independent Board of Directors.

The Friends of HPL has seen many changes in the past 60 years, and we have given much support to the Houston Public Library system. Today, the HPL system consists of 42 locations including the Central Library; Special Collection libraries (like the Houston Metropolitan Research Center, the Clayton Center for Genealogical Research and the African-American Library at the Gregory School); four regional libraries; four express libraries; one Mobile Express library; and one satellite library (located at the Children’s Museum).

As the Friends of HPL continues to evolve to meet new challenges and opportunities, we invite you to become a part of our mission by volunteering, becoming a member or partner, shopping with us at our book sales and online, and spreading your love of libraries.